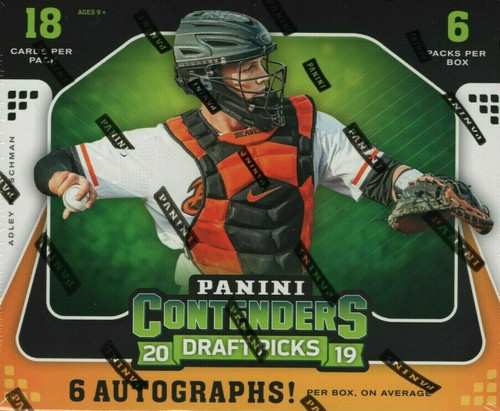 RODUCT HIGLIGHTS
- Find autographs of all of the top 2019 draft picks in Draft Tickets Prospect Tickets and International Tickets!
- 2019 Contenders Draft Picks Baseball features some of the first autographs from this year’s top draft picks and current hot prospects!
- Look for on-card autographs from players drafted in the first 3 rounds from this year’s draft in RPS Draft Ticket!
- New this year, top draft prospects will have on-card autographs on the immensely popular Opti-Chrome substrate in Contenders Optic.
- Look for 6 autographs per box!

SEASON TICKET
Expanded to a 60-card set, the Season Ticket checklist contains a range of players from former campus legends like Frank Thomas to future stars like Casey Mize.

INTERNATIONAL TICKET BB
Hunt for autographs from some of the most sought-after international talents in the game in International Ticket.