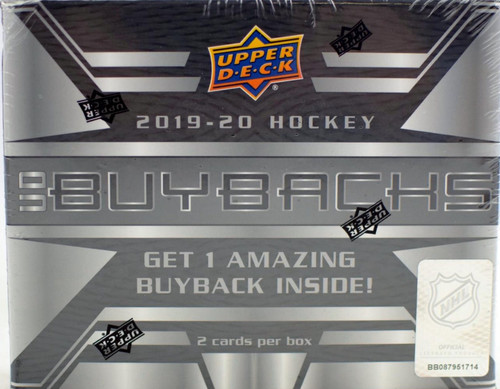 Be on the lookout for some monster hits including the 2015-16 Acetate Connor McDavid Young Guns card, one of his highest value nonautograph cards on the market!

Look for Hard-Signed Young Guns! Be on the lookout for Rookie Redemption cards for the 2019 #1 Draft Pick.

Pull Buybacks from Amazing Sets, such as Ultimate Collection & The Cup! Look for 1-of-1 Signatures from Hall-of-Famers!

In Addition, Get 1 Low-Numbered Card from the following:

The 2015-16 Upper Deck Canvas Program of Excellence Connor McDavid card is an iconic Rookie card, from one of the game's best! UD Buybacks is slated to include 10 hard signed copies, #'d up to 10!

Another tough find is the 2017-18 the Day with the Cup Flashbacks Upper Deck Hockey insert set. This extremely rare card will feature a Patrick Roy hard-signed autograph.

Auston Matthews is one of the biggest young stars of the game. UD Buybacks will feature his 2016-17 O-Pee-Chee Platinum Siesmic Gold Autograph card.

Collectors can expect to find some huge hardsigned Young Guns cards including the 2006-07 Evgeni Malkin Young Guns or the 2013-14 Vladamir Tarasenko Young Guns.

Buybacks: (Combining to deliver 1 per pack!!)

Base Set: (All Low-Numbered!)