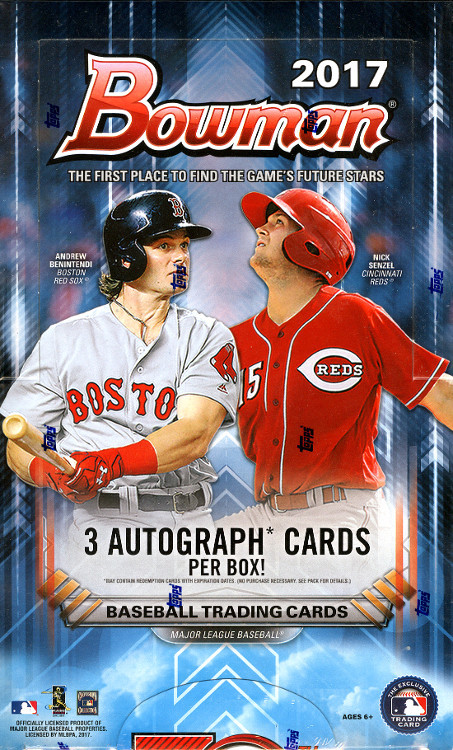 1992 Bowman
Celebrating this collector favorite with active veterans, prospects, and retired players.
Parallels for the above sets will include:
- SuperFractor: numbered 1/1.

Also look for limited autograph variations of the 1948 and 1992 Bowman insert sets! HOBBY SKUS ONLY!


BASE CARDS
Paper Base Cards will continue as a vital element of 2017 Bowman Baseball.


INSERT SUBSETS
A variety of new insert subsets will be unveiled in 2017 Bowman Baseball, including the following:

Talent Pipeline
Highlighting the top players at each level of the Minor League system.

Bowman Scouts' Top 100
Look for the popular subset to return in 2017, featuring the top 100 prospects as ranked by our Bowman Scouts.


ADDITIONAL CONTENT
In celebration of its 70th anniversary, Hobby and Hobby Jumbo Boxes of 2017 Bowman Baseball will include unannounced surprises as well as the following additional content.