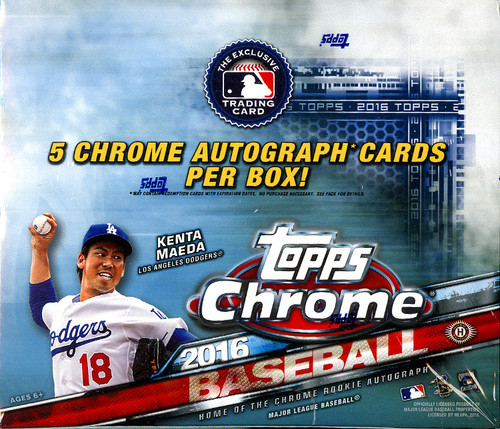 TEAM LOGO AUTOGRAPHS - NEW!
Inspired by the Topps Baseball Series 1 Team Logo Pin cards, these cards will feature players who are the faces of their respective franchises. Sequentially numbered.

Parallels for the above autograph sets will include:
- Red Parallel: sequentially numbered to 5.
- SuperFractor: numbered 1/1.
- Printing Plates: numbered 1/1.


**Also look for Base Card Image Variations of notable subjects from the base set! *LIMITED*


NEW CASE HIT FOR 2016
New to the 2016 release, Hobby cases will feature 1 ROY Chronicles insert card per case. This limited edition insert set will feature active veterans who have won Rookie of the Year awards.

BASE CARDS (200 SUBJECTS)
The base set will include the biggest stars from Topps Baseball Series 1 and 2 on chrome technology, including the most current and collectible 2016 rookies.