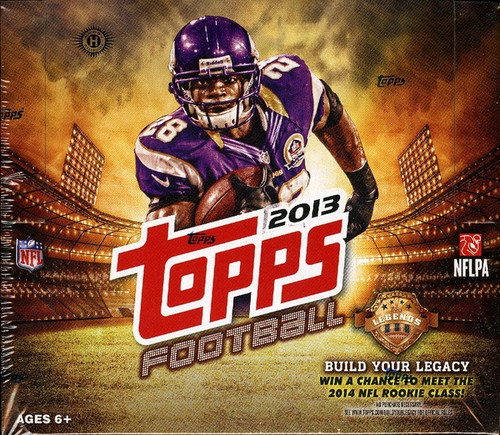 Two (2) Autograph cards and one (1) Rookie Patch Relic Card will appear in each box.

BUILD YOUR LEGACY
Become a part of history and establish your own legacy by competing in the Build Your Legacy Promotion.  Collect the entire 110 "BUILD YOUR LEGACY" Rookie Parallel set to win awesome prizes and a chance to meet the future legends of the NFL at the 2014 NFLPA Rookie

Legendary Moments
Up to 30 legendary subjects have the most unforgettable moments in their career captured with a replica filmstrip. #'d to 99.

Legendary Captain's Patches
Up to 30 legendary subjects are celebrated with commemorative Captain's patches. Seq #'d to 99

Veterans
265 cards of the NFL's most prominent players


INSERT CARDS - Gridiron Legends have paved the way for today's "Legends in the Making" and "Future Legends".

Legends in the Making
Features NFL superstars destined to become the next generation of Hall of Famers. (1:6 packs)

Future Legends
Features Rookies and young superstars who have made or will soon be making legendary debuts in the NFL (1:4 packs)

1959 Topps Minis
Features a blend of the greatest NFL players of all time, current and retired, on the classic 1959 Topps design. (1:3 packs)

Topps Autographs
Up to 50 subjects. Featuring rookies and veterans.

Topps Relics
Up to 50 subjects. Featuring rookies and veterans.

In The Name Relics - Hobby Only
Letters and cloth backing from the nameplate of a veteran jersey. Each card will be seq #'d 1/1.

In The Name Autograph Relics - Hobby Only
Letters and cloth backing from up to 40 NFLPA Rookie Premiere players with an autograph on each letter. Each card will be seq #'d 1/1.

Ultimate Rookie Autograph Card
- Multi-panel autograph book card featuring all of the subjects from the 2013 NFLPA Rookie Premiere #'d to 5.

2012 Topps All-Pro Team
Up to 22 players will be chosen as the best of the best from the 2012 NFL season and honored with manufactured awards.