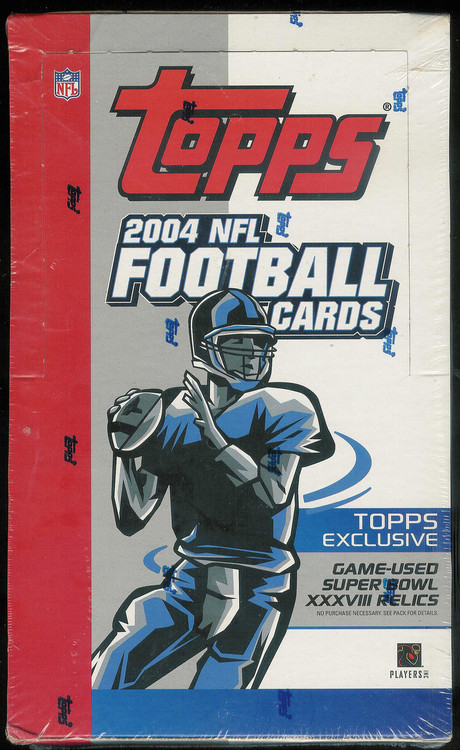 BASE CARDS - 385 SUBJECTS
VETERANS - 290 gridiron experts prepare for a new season.
WEEKLY WRAPUP - TGIF! It's 20 cards that highlight the best from each week.
75 ROOKIES! - These 75 tough newcomers join their NFL mentors on the field, including Eli Manning, Roy Williams and Larry Fitzgerald.

INSERT CARDS - INSERTED 1:4 PACKS
HOBBY MASTERS - Get the possession! It's the 10 most collectible players in the NFL on Dot Matrix technology. - HOBBY EXCLUSIVE!
OWN THE GAME - These 30 impressive NFL performers (QB, WR, RB and DEF) stack the 2003 stats on Dot Matrix technology.
NEW 2004 PREMIERE PROSPECTS - The 20 topmost Rookies photographed at the 2004 Rookie Premiere photo shoot enter the NFL ranks on incredible foil cards. Get a glimpse of them in their NFL uniforms!

TOPPS EXCLUSIVE! RING OF HONOR - ONLY FROM TOPPS!
RING OF HONOR - Try this on for size! A continuation from last year, this foil card pays tribute to the Super Bowl XXXVIII MVP, Tom Brady.

VERY FEW GET TO GO TO THE SUPER BOWL - players OR fans - so Topps is bringing the biggest game of the year to you. It's TOPPS EXCLUSIVE Relics from Super Bowl XXXVIII that collectors won't find anywhere else!

PARALLEL CARDS
GOLD BORDER - The 385 pros from the base set run a new play on cards with gold speckled borders. Sequentially numbered* to 499.
BLACK BORDER--HOBBY EXCLUSIVE! - All 385 players from the base set take the hits on cards with black speckled borders. Sequentially numbered* to 150. HOBBY EXCLUSIVE!